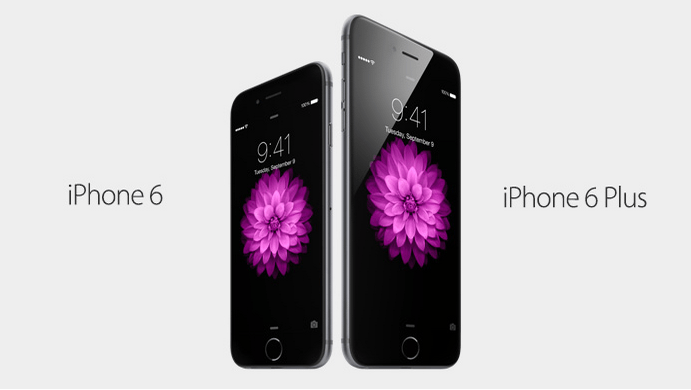 We all have a good idea about which countries in the world are more expensive than others? We’ve all been abroad and bought a meal, or a new shirt and are aware of the price differences between overseas and home and between the different countries we’ve been to. But how do we know for sure which country is the cheapest or the most expensive, and can this information help with online international shopping?

For instance, where is the cheapest country in the world to buy an Apple iPhone 6 in 2015?

Deutsche Bank, the German investment bank, has done the sums and released a report with the details of their survey, called Mapping the World’s Prices, created by analyst Sanjeev Sanyal.

The survey covers the prices of lots of different products from different countries all over the world, from a packet of Marlboro cigarettes to an Apple computer, the price of a copy of The Economist magazine to a men’s haircut and much more. This is an annual report that has been published for at least 4 years, and makes very interesting reading.

Australia the most expensive, USA the cheapest developed nation.

The headline stats tell us that Australia is, once again, the most expensive country in the world overall, with the USA the cheapest developed country although the gap between the two has decreased since last year. The UK sits at the 3rd most expensive country on the behind Australia’s neighbour, New Zealand. Anyone who has tried to buy a book or some clothing in Australia or New Zealand will attest to the sky high prices that some places will charge. For many people in these countries it is cheaper to buy cross border from an overseas shop with worldwide shipping, especially if the delivery costs are free.

India is the least expensive country, and they score highly for cheapness across many of the categories measured. Most other countries, including Russia, Canada and Singapore all are considered cheaper that the US.

Looking more at some of the categories you can see that in Brazil you have to pay nearly twice as much for an Apple iPhone 6 $1254 than in the US, the cheapest country, at $650. So buying Apple iPhones and other Apple products is still cheaper in America that anywhere else in the world. The United Kingdom is the next cheapest place to buy the Apple smartphone with only a 23% mark up on the USA price. 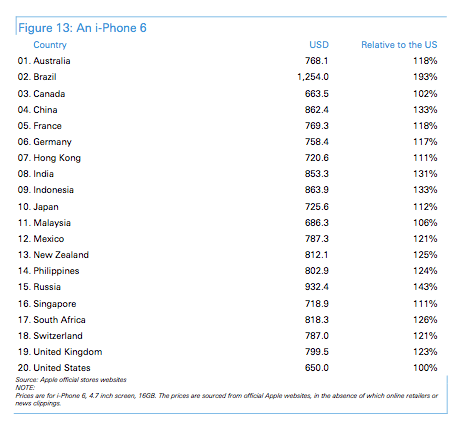 For clothing a good example is an pair of Adidas Super Star 2 trainers, despite Adidas  being a German company, Germany is the most expensive place to buy them, where at $130 for a pair is the same as buying them in France. This time Brazil at $49.50 is the cheapest, Japan and Mexico sell them for around the 70 buck mark.

Levis 501 jeans, another popular purchase that was measured, are cheaper in India, again, and even Canada a pair can be bought for 76% of the full US price. Don’t buy them in Singapore or even Russia, which all feature with prices above those found in the USA.

If you want to buy a car abroad, it is advisable to avoid Singapore which was the most expensive place to buy a VW Golf, Mumbai in India was the least expensive and Russia was nearly as cheap.

This survey is considered to be similar to The Economist’s Big Mac index, which measures the price of a McDonalds burger across several different countries.

So we can see that by comparing the different countries it becomes apparent where it is cheaper internationally to buy things from. This tells us which countries to avoid and which to buy from for certain goods and services. Of course the currency exchange rates make a difference which is why since last year Brazil has become relatively less expensive.

Using the internet and our list of shops with international shipping, it is easy to identify the best shops in the best counties to buy your favourite or desired shopping from. If the shop doesn’t do international shopping then it is worth checking out a freight forwarder to see if they will reship the product to your home address on your behalf.

Remember many international online shops will ship internationally for free. We have our shops listed in a way that is easy to compare and we encourage shoppers to write honest reviews to aid others in their shopping decision making.